This fall my cousins, the Karr family, and I partnered in our first attempt at raising meat chickens on the land.

Recognizing that chickens’ presence on our grazing lands would be ecologically beneficial as well as filling an economic niche, we decided that adding chickens would be a sooner or later project, so we chose sooner.

In fact, instead of waiting until spring, we started a hatch in early September, so that we could accelerate our learning curve (and experiment). We ordered 50 red ranger broiler chicks; 48 of them were moved to pasture with a partially enclosed hut made of cattle panels and tarp. Their slide-able hut was moved as often as possible, or they were allowed to walk around within an electric chicken fence.

We threw a number of experimental factors into the mix:

All along the way, the chickens preferred to peck the ground versus empty the feeder. Red rangers are bred to be more like their jungle-fowl predecessors than their confinement barn contemporaries. Our rangers ate every kind of leaf, insect, and seed before turning to the feed provided. 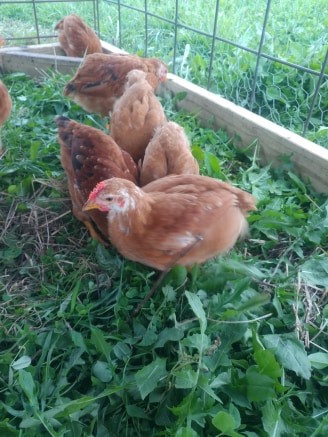 Cold weather and dietary mismatch kept our birds from filling out on the usual schedule. We postponed harvesting the chickens by about two months.

When it came for butchering, we gathered the chickens in the dark (much less stressful) and I took them to a USDA-inspected poultry facility for processing, so that the chickens can be sold anywhere (as far as I’m aware).

There, the carcasses were air-chilled, as opposed to the typical ice water bath. This has two big advantages: one, it’s assumed that any organisms on one chicken body are not as likely to be passed to the rest, as compared to one big bath; two, the packaged chicken is not full of added water, so the customer is only paying for the natural weight of meat and bone.

Our packaged and frozen chickens weigh between 4.5 and 6.5 lbs. They are available for purchase in Monroe City for about $14 apiece.

Good. And different. That’s what we planned.

The extra age on these birds means they have dark leg meat, which has it’s own profile of flavors. Different is what we were counting on, though we didn’t plan for over-mature. Going in, we expected that our chickens would stand apart in flavor and richness.

Most of us have no idea today what a chicken tastes like without being raised on processed feed. This winter, we are getting an idea of that, but I think we have plenty of potential for making better tasting birds. The ground will be much greener when our future broilers hit the ground.

Part of me wonders if we should keep over-maturing these birds–flavor takes time to establish in meat–but we shall see.

We learned that we won’t be trying to raise any more chicks in October. We’ll be re-aiming at feed sources.

I plan to trail chickens behind the sheep paddocks by about three days difference as they cross the pastures.